Fork me on GitHub

Apache Shiro’s first and foremost goal is to be easy to use and understand. Security can be very complex at times, even painful, but it doesn’t have to be. A framework should mask complexities where possible and expose a clean and intuitive API that simplifies the developer’s effort to make their application(s) secure.

Here are some things that you can do with Apache Shiro:

Shiro attempts to achieve these goals for all application environments - from the simplest command line application to the largest enterprise applications, without forcing dependencies on other 3rd party frameworks, containers, or application servers. Of course the project aims to integrate into these environments wherever possible, but it could be used out-of-the-box in any environment.

Apache Shiro is a comprehensive application security framework with many features. The following diagram shows where Shiro focuses its energy, and this reference manual will be organized similarly: 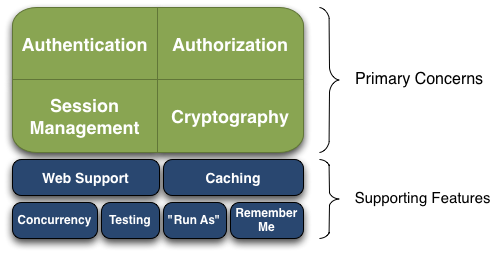 There are also additional features to support and reinforce these concerns in different application environments, especially:

A First Look at Apache Shiro

Software applications are usually designed based on user stories. That is, you’ll often design user interfaces or service APIs based on how a user would (or should) interact with the software. For example, you might say, "If the user interacting with my application is logged in, I will show them a button they can click to view their account information. If they are not logged in, I will show a sign-up button."

This example statement indicates that applications are largely written to satisfy user requirements and needs. Even if the 'user' is another software system and not a human being, you still write code to reflect behavior based on who (or what) is currently interacting with your software.

Shiro largely reflects these concepts in its own design. By matching what is already intuitive for software developers, Apache Shiro remains intuitive and easy to use in practically any application.

Shiro’s architecture has 3 primary concepts: the Subject, SecurityManager and Realm s. The following diagram is a high-level overview of how these concepts interact, and we’ll cover each concept below: 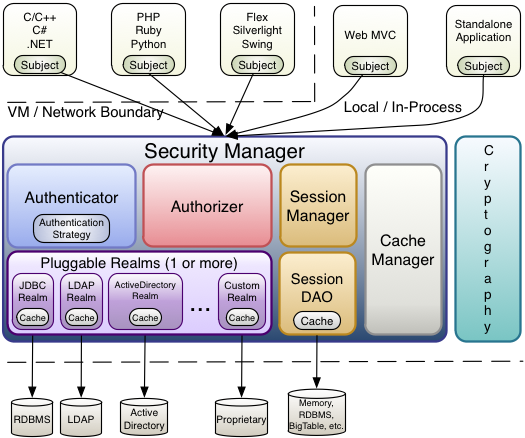 The Subject is essentially a security specific 'view' of the the currently executing user. Notice that it is not actually named User however. The name Subject was chosen for two reasons:

You can acquire the current Subject anywhere in your application code as shown here:

Once you have a Subject instance, you immediately have access to 90% of everything you would ever need to do to perform security for that Subject, such as login and logout, perform role and permission checks, access their session, and more - but more about this later. The most important thing to know is that the Subject is your 'security-specific view' of an application 'user' and that you can essentially access this anywhere in application code to perform whatever security operations you need.

While application developers almost exclusively interact with Subject instances in their code, Subjects have a 'behind the scenes' counterpart that makes them work - the Shiro SecurityManager (note this is not the same thing as the java.lang.SecurityManager).

The SecurityManager is the heart of Shiro’s architecture and acts as a sort of 'umbrella’ object that coordinates internally nested security components that form an object graph. However, once the SecurityManager and its internal object graph is configured, it is usually left alone and application developers spend almost all of their time with the Subject API.

We will talk about the SecurityManager in detail later on, but it is important to realize that when you interact with a Subject, it is really the SecurityManager behind the scenes that does all the heavy lifting for any Subject security operation. This is reflected in the basic flow diagram above.

The third and final core concept in Shiro is that of a Realm. A Realm acts as the ‘bridge’ or ‘connector’ between Shiro and your application’s security data. That is, when it comes time to actually interact with security-related data like user accounts to perform authentication (login) and authorization (access control), Shiro looks up many of these things from one or more Realms configured for an application.

In this sense a Realm is essentially a security-specific DAO: it encapsulates connection details for data sources and makes the associated data available to Shiro as needed. When configuring Shiro, you must specify at least one Realm to use for authentication and/or authorization. More than one Realm may be configured, but at least one is required.

Shiro provides out-of-the-box Realms to connect to a number of security data sources (aka directories) such as LDAP, relational databases (JDBC), text configuration sources like INI and properties files, and more. You can plug-in your own Realm implementations to represent custom data sources if the default Realms do not meet your needs.

Like other internal components, the Shiro SecurityManager manages how Realms are used to acquire security data and then represented as Subject instances.